A new collaborative effort by six Madison nonprofits could change the way nonprofits do business in the future. 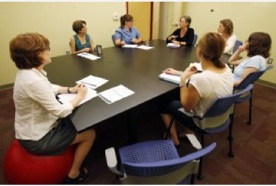 The Center for Change, a project headed by Community Shares of Wisconsin, is opening its doors to the public Wednesday and could represent a new business model for cash-strapped nonprofits.

This is not the first time a group of Madison-based nonprofits have collectively purchased an office space, but it introduces a new model for nonprofits that focuses on collaboration between member nonprofits and local businesses.

“For a long time, having a space where multiple nonprofits could work together has been an idea of ours,” said Crystel Anders, director of Community Shares of Wisconsin. “This really goes beyond just sharing a space. It’s about eventually sharing staff and providing professional resources for nonprofits.”

Inside the office, the groups will share equipment such as printers, phones, copiers and wi-fi, but the goal is for many of these smaller nonprofits to work together on projects, sharing ideas, volunteers and even staff.

“Where you actually see the cost savings is when you get to the higher level of collaboration and you can start utilizing shared staff,” Anders said.

Lindsay VanVonderen, a 21-year-old accounting student at Edgewood College, is the first person in the office to work for multiple nonprofits. She spends most of her time working as an administrative assistant for the League of Women Voters, but also works for Community Shares of Wisconsin. VanVonderen says she’s already seen the benefits of sharing resources.

“While I was reaching out to sponsors for a Community Shares awards event, I knew this person and she ended up volunteering to be a poll watcher (for the League of Women Voters) … Being able to work with each organization in depth is helping,” she said.

VanVonderen’s boss agrees that staff and volunteer sharing will be one of the biggest assets that the Center for Change will offer to small nonprofits.

“Sometimes we don’t have anything for volunteers to do, especially if I’m out of the office for the day,” said Andrea Kaminski, executive director of the League of Women Voters of Wisconsin. “To share volunteers with other organizations makes a lot of sense.”

The Center for Change has also partnered with a number of Madison-based businesses to provide cost-free consulting on topics ranging from finance and nonprofit law.

“Some of these smaller nonprofits deliver great services, but administratively they can’t keep up. That’s where the business community can step in,” said Scott Haumersen, of Wegner CPA’s and Consultants. Haumersen has been auditing for many of the Community Shares members for 25 years and said that Wegner has donated a collection of books on nonprofit management to create a resource library at the Center for Change.

The Center for Change’s new location and arrangement with Delta Properties allows for future expansion. More than 25 Community Shares member nonprofits expressed interest in the shared space, but lease ending dates prevented more from moving into the Center for Change immediately, Anders said.