Pete Braden, Wisconsin Council of the Blind and Visually Impaired Out of the blue, Wisconsin Council of the Blind & Visually Impaired got a call from UW student Pete Braden, suggesting a Mad City Bloomsday fundraising event. Renowned author James Joyce dealt with lifelong vision challenges and was almost blind when he died. Not only did Pete originate the idea, he followed through to do much of the work, with the Bloomsday proceeds benefiting this nonprofit.

For more information about the Wisconsin Council of the Blind and Visually Impaired or to volunteer, visit www.wcblind.org or call 608-255-1166. 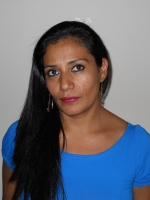 Berlin Victor, UNIDOS Against Domestic Violence As a survivor of domestic violence, Berlin Victor is very involved in UNIDOS Against Domestic Violence—especially its leadership group, Women Moving Forward, which helps women move from the role of victim to that of leader. Berlin is a particularly effective mentor to women. As UNIDOS celebrates its fifth anniversary, the group is very grateful to volunteers like Berlin.

For more information about Unidos Against Domestic Violence or to volunteer, visit www.unidosagainstdv.org or call 608-256-9195.